1 of only 6 Sacred Music Festivals in the World! 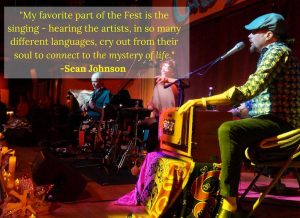 For our 9th year, the New Orleans Sacred Music Festival is bannering its, now permanent, theme “Music Against Hate.”  Against this we come together to share music and gifts from many faiths and cultures, much-needed medicine for our times. 1 of only 6 in the world, the festival is a healing space for us to sing, dance, listen, pray, play and celebrate.  Sean Johnson, one of its founders and the author of this theme, likes to quote the mystic Meister Eckhart who said “God is a great underground river that no one can stop, and no one can dam up.”  The spiritual traditions from around the world represented at the festival are like wells that offer participants the opportunity to quench their hearts in this parched time and drink from the great sacred unifying river that flows beneath.

Sallie Ann Glassman, another founder, remembers the first festival.  She was amazed at what being presented with hundreds (now thousands) of happy, loving, spiritually focused people felt like. It was beautiful to hear the Muslim Call to Prayer recited in person over our heads and also to watch Imam NuMan beaming in appreciation while Cantor Joel Coleman sang Jewish songs. Not to mention the joy of watching Tibetan monks dancing to Gospel music.  At the fest we discover the many kinds of sacred music as well as the spiritual sides of well-known and much-loved musicians:  Deacon John performing spirituals, Mayumi Shara and James Singleton reimagining traditional second lines via Japanese taiko drumming and mashups of Chuck Perkins’s poetry and Claudia Copeland’s medieval chants.  The festival has expanded to include a St. Roch Avenue peace walk, interactive workshops, a youth program and many striking altars from different faiths. Sallie Ann notes that the fest is simultaneously steeped in tradition and cutting edge and, as always, lives into the truth that in New Orleans the sacred is funky!

SMF  helps move the metropolitan community from diversity (the demographic fact of growing minority-faith and multiple ethnic identities) to pluralism (increased knowledge about and positive experience of that diversity).   Artists of many faiths and ethnicities meet and interact on mutually recognized “sacred ground.”  The attendees bring home new awareness and appreciation of those faiths and ethnicities.  The audience responds with great enthusiasm, filling the mainstage venue for almost all of the fest day and the lobby stage area for much of it. Over the course of eight years, SMF has grown to gain an attendance of over 2,500 people annually.

SMF has received thanks from faith and grassroots leaders.  They noted that their musical and cultural traditions are rarely showcased to the larger community, and they also cite the importance of the festival’s message of inclusion.  The performers of sacred music and other arts are encouraged by the financial support, as they are often expected to play for free, regardless of their excellence and expertise.  Finally, young people were both impacted and impactful; a prime example being the youth-led peace walk to open the festival.