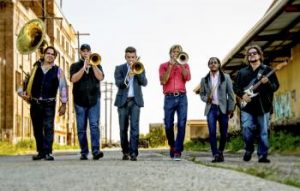 Formed in New Orleans in 1998 by trombone players Mark Mullins and Craig Klein(who from 1990-2006 were also members of Harry Connick Jr.’s big band), Boneramabills itself as a brass/funk/rock band, but Bonerama is much more than that. Bonerama is a New Orleans musical institution. They are one of the most genuine, unique and interesting bands to have ever come out of the Crescent City. Bonerama incorporates jazz, brass, funk, fusion, soul, pop, rock, blues, a touch of alternative and even a bit of reggae into its one-of-a-kind sound. Three trombones front the band, plus a sousaphone, guitar and drums all delivering a powerful sound that you have to hear to believe.

Bonerama has always been hailed as “unlike anything you’ve ever heard before.” It’s the best way to describe this 20-year-old powerhouse touring band from New Orleans, LA. In addition to changing the way people think about the trombone, the sound of Bonerama has become an influence and contribution to the sound of New Orleans music today. With newer acts such as Trombone Shorty and Big Sam’s Funky Nation on the national music scene, it is New Orleans that has benefited with a newfound reputation as being a bonafide “Trombone Town”. These bands all carry the trombone like the trophy it truly is in New Orleans, and Bonerama helped cement that in present day New Orleans music culture.

The band has performed and recorded with countless national artists such as R.E.M., OKGo, Tom Morello, Wayne Kramer (MC5), Jill Sobule and many more, all while bringing their distinctive sounds from New Orleans to a national spotlight. Festivals and events such as The Monterey Jazz Festival to High Sierra Music Festival, Jam Cruise, Bear Creek Festival and of course the New Orleans Jazz & Heritage Festival only scratch the surface of the extensive festival work this band has seen. National television appearances on CBS (Late Show with David Letterman), HBO (Comic Relief, Treme) and CNN have further exposed Bonerama to a wide range of unsuspecting new viewers.
While the band has endured the highs and lows of all that comes with the territory of living and breathing music as a career path, the song for Bonerama has remained the same: being centered around their beloved trombone, city and culture while striving for greatness with a fun spirit.

Whether it’s their inventive covers or funky, rocking originals, rest assured Bonerama will take you on your most memorable RIDE ON THE SLIDE!

New Orleans native John “Papa” Gros (pronounced grow) has spent more than a quarter-century behind the piano championing the music of the Big Easy. He turns over a new leaf with his second solo album, River’s on Fire, which mixes the sounds of rock & roll, funk and rootsy Americana into a genre-bending gumbo that carries on the tradition of New Orleans, both honoring its past and helping to shape its future.

Inspired by hometown hero and longtime colleague Allen Toussaint, who passed away while Gros was recording the album on the Vermilion bayou in southwest Louisiana, River’s on Fire is John’s first release since his former band, Papa Grows Funk, disbanded in 2013. The quintet held down a weekly residency for more than a dozen years at the famous Maple Leaf Bar in Uptown New Orleans, mixing the smooth sophistication of a jazz quintet with the wild, anything-goes spirit of Mardi Gras. Papa Grows Funk released six critically-acclaimed albums along the way, including Needle in the Groove, which was co-produced by Toussaint – with Gros leading the charge as the group’s front man, songwriter and organ player.

Gros is a renowned songwriter who recently shifted his creative methodology from guitar to piano: “Previously, I had done most of my songwriting on guitar. I found that it forced me to focus on simpler chord choices and arrangements. The piano allows me the luxury to create more sophisticated compositions. With the keys I can focus on a balancing act- juggling between complexity and simplicity, while keeping the priority on the lyrics and melody.”

Powerhouse vocalist Darcy Malone was born into the New Orleans music scene being the daughter of the legendary New Orleans Radiators front man Dave Malone and niece to Tommy Malone of The Subdudes. Darcy now fronts her own band Darcy Malone and The Tangle. The band currently has two recorded albums and are playing notable venues and festivals in New Orleans and throughout the country. With comparisons to Darlene Love, Ronnie Spector, Janis Joplin, and local famed singer Lil’ Queenie, Darcy incorporates elements of soul, jazz and pop into her powerful raspy voice.  She has sung with a large number of amazing New Orleans artists including Leo Nocentelli and George Porter of The Meters, Theresa Andersson, Johnny Sketch and The Dirty Notes, The Radiators, The Pfister Sisters, Bonerama, and many more. Tonight’s Jazzfest closer features Darcy front and center, and promises to be a treat for all in attendance.